Doors opened at 11 a.m. at the iconic burger chain, which was originally established 15 years ago in Manhattan’s Madison Square Park.

Anticipating its inaugural day of business, the 2,919-square-foot Shake Shack in St. George hosted a “friends and family” party Monday. The daylong event invited guests to stop in to sample eats and drinks from a limited menu. Staff practiced on the register and in the kitchen. At the end of the meal, patrons were handed a brief questionnaire for feedback on hospitality, employees’ knowledge of the menu, wait time for food, quality and “Shack cleanliness and maintenance.” 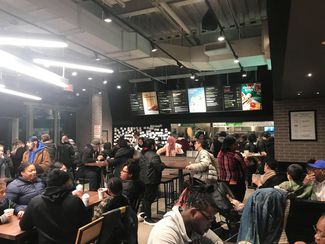 Known for its 100 percent all-natural Angus beef burgers, crisp-fried battered chicken breast sandwiches and freshly made frozen custards, Shake Shack features classics found at its 260 restaurants worldwide. Yet it also tailored a few details of the drink menu, making frozen custards unique to the St. George outfit. There is “The Empire Shacks Back” using Mark’s Bake Shoppe’s Nutella pretzel cookie in a vanilla custard beverage with salted caramel sauce. The Richmond baker’s fudge brownies have been used at the Staten Island Mall’s Shake Shack since its opening in June 2018.

“We were honored when Shake Shack chose us to partner with them for their first Staten Island location, and we are just ecstatic that they asked us to partner once again for their Empire Outlets location,” said Amanda Intoccia, Mark’s co-owner and the baker’s wife. She thinks the sweet-on-salt Nutella pretzel cookies are an ideal match with ice cream.

Also particular to the Empire Outlets restaurant is the “Pie Oh My” — vanilla custard with pieces of Brooklyn’s Four & Twenty Blackbirds pie — and the “Shacky Road” — chocolate custard as the backdrop to marshmallow sauce, chocolate truffle cookie dough and almonds. 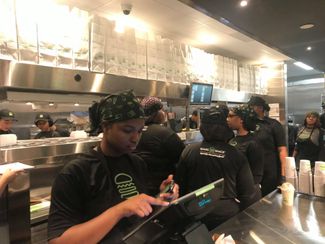 Shack Shack’s loyalty to the Big Apple continues with a custom, pattern-based mural in the dining room by Brooklyn-based artist Jaima. Craft beer on tap features Flagship Brewing Co.m Tompkinsville, and fellow New York City brewers Captain Lawrence, Sixpoint plus its own line, a Brooklyn Brewery-crafted ShackMeister Ale. Wine from the Gotham Project is served under the labels Shack Red and Shack White.

There is a charitable component to the Empire Outlets Shack Shack under the banner of Stand For Something Good — 5 percent of sales from Pie Oh My go to the borough-based Stephen Siller Tunnel to Towers Foundation, a nonprofit honoring the sacrifice of Firefighter Stephen Siller on 9/11.